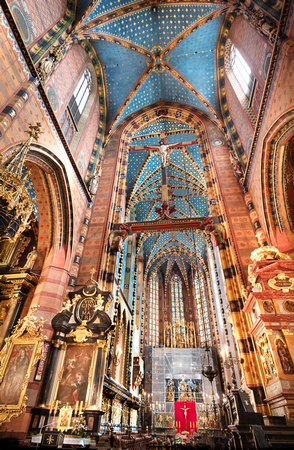 Saint Mary's Basilica is a brick Gothic church adjacent to the Main Market Square in Kraków. Built in the 14th century, its foundations date back to the early 13th century and serve as one of the best examples of Polish Gothic architecture. Standing 262 feet tall, it is particularly famous for its wooden altarpiece carved by Veit Stoss (Wit Stwosz). In 1978 it became a UNESCO World Heritage Site alongside the Historic Centre of Kraków.
On every hour, a trumpet signal is played from the top of the taller of Saint Mary's two towers. The plaintive tune breaks off in mid-stream, to commemorate a famous 13th century trumpeter who was shot in the throat while sounding the alarm before a Mongol attack on the city.
The Altarpiece by Veit Stoss is the largest Gothic altarpiece in the world and a national treasure of Poland. It is located behind the High altar of St. Mary's Basilica in Kraków. The altarpiece was carved between 1477 and 1489 by the German sculptor Veit Stoss (known in Polish as Wit Stwosz) who lived and worked in the city for over 20 years.
© Patrick McCabe
Powered by ZENFOLIO User Agreement
Cancel
Continue