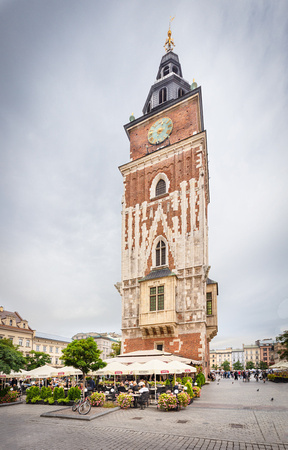 Town Hall Tower — Built of stone and brick at the end of the 13th century, the massive Gothic tower of the early Town Hall stands 300 feet tall and leans just 1.8 inches, the result of a storm in 1703. The top floor of the tower has an observation deck.
The original Gothic helmet adorning the tower was consumed by fire caused by lightning in 1680. The ensuing reconstruction of the tower took place between 1683 and 1686. The work was directed by the royal architect Piotr Beber, who designed the new and imposing Baroque helmet, which survived only until 1783. At that time, the helmet began to crumble, and was replaced by a smaller structure. The rest of the town hall was torn down around 1900 to open up the space in the square.
© Patrick McCabe
Powered by ZENFOLIO User Agreement
Cancel
Continue