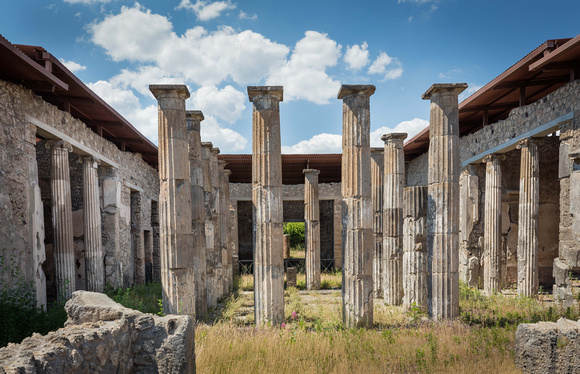 House of Epidius Rufus—this large house, built in the second half of the 2nd century BC, must have belonged to Marcus Epidius Rufus or Marcus Epidius Sabinus,
to judge from the number of times these two names appear in the election propaganda on the façade and on the walls of the neighbouring buildings. Outside,
a two-step podium runs along the façade, an unusual architectural feature. Beyond the entrance vestibule is an atrium of Corinthian type of an imposing size, with sixteen columns with Doric capitals set around the impluvium basin in the centre. This is the most striking of the rare Corinthian atrium in Pompeii (in other words with a row of columns set along the side of the impluvium).
© Patrick McCabe
Powered by ZENFOLIO User Agreement
Cancel
Continue